If I Could Turn Back Time…

The EMS Synthi AKA the Putney AKA the VCS3 is one of the most sought after holy grails of true analog bliss.   Originally released in 1969, it boasts a user base that includes the Chemical Brothers, The Who (Won’t Get Fooled Again’s iconic intro sequence), Portishead, Kraftwerk, Brian Eno, and many many more. 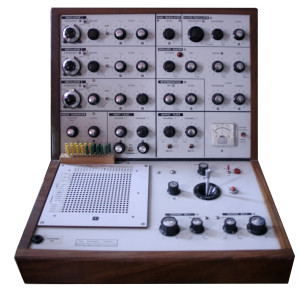 Enigmatic to program and gloriously unpredictable for the uninitiated, it is an inexhaustible source of inspiring and unique sounds.

Upon first sight, it looks more like a prop from a Bond villains lair than a musical instrument, with it’s missile launch console appearance, joystick, and pegboard grid.  Indeed, for such a small device, it packs a hell of a wallop.

What warrants today’s wistful look in the rearview is that the masterminds over at apeSOFT have faithfully revived this enigma as an iOS app, and christened it the iVCS3.  So in this review we’re going to touch on some of the features of the original VCS3 hardware as a whole, and then jam on the features of the app, giving you a bit of context for why this is such an amazing and incredibly awesome addition to the iOS emulation market. 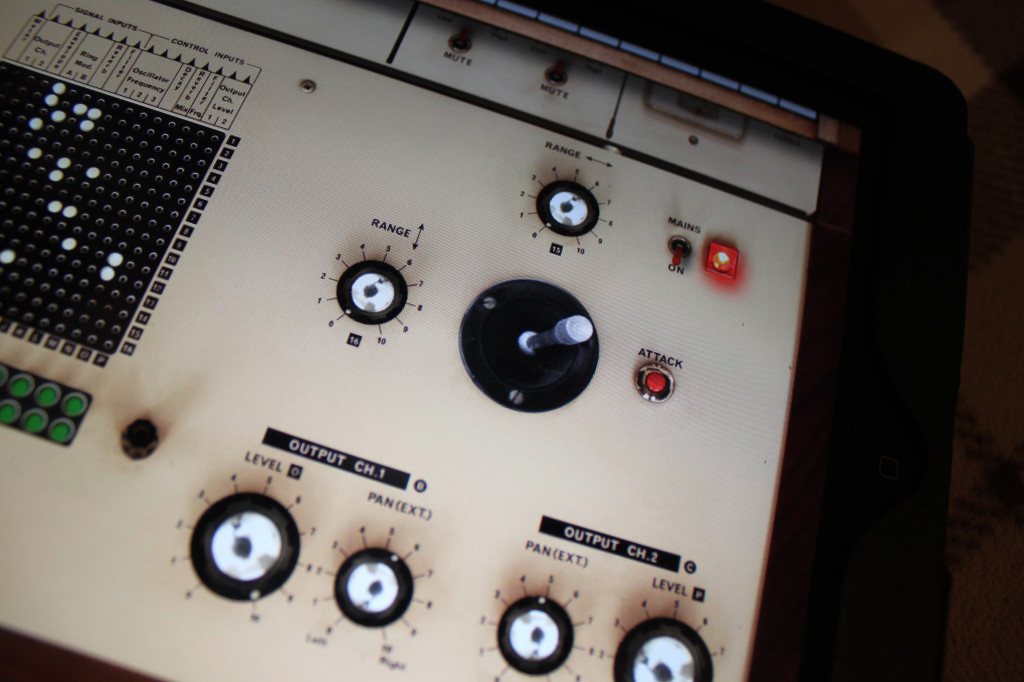 The original VCS3 contained 3 oscillators, though one is a dedicated control rate oscillator, used for modulating other aspects of the sound generation.  They sweep across huge ranges, and have blendable waveform outputs including sine, triangle and pulse.

The filter section is gorgeous but simple – a single LPF with a self oscillation capability, this smooth sounding circuit can give you plucky tones or screaming shrieks depending on settings.

Enigmatic to program and gloriously unpredictable for the uninitiated, the VCS3 is an inexhaustible source of inspiring and unique sounds.

The envelope section is truly unique.  Firing off in either a trigger / repeat fashion, it includes a “trapezoid” function, which was unique – as far as I know – to the EMS line, although there are now Eurorack modules designed to reproduce this control.  It’s essentially a ramp/on off with sustain built in, but has a really recognizable curvature.  It’s very very flexible, although getting your head around how to get the most out of it takes a little doing if you come from an ADSR only background.

A built in ring modulator can take a huge combination of inputs – this is one of the reasons why the VCS3 is renowned as a sound effect monster.  Unlike most ring modulators included on later synths that mapped an oscillator signal to a dedicated modulation oscillator, the VCS3 allows for many inputs to be sent to the ring modulation inputs via the pegboard matrix – more on that later.

An included noise generator allows for colour control – this form of filtering allows for the bite of white noise or the muffled drone of pink, etc.  Useful in sound sculpting, the colour control means that you don’t need to dedicate your filter to controlling the noise spectrum, freeing it up for more comprehensive use.

Another cool feature was the built in spring reverb.  It sounds glorious, and can be put into the signal flow in a multitude of ways.  This was one of the best implementations of an effect as an integral part of the sound creation.

By far the most iconic aspect of the VCS3 was its modulation matrix, and like the original, this is where the iVCS3 comes alive.

The VCS3s semi-modular architecture is broken out here into a pegboard interface.  It looks complex, and certainly CAN be used to create incredibly complex routings, but at its core, the pegboard matrix represents a giant number of patch points that on another modular synth would have justified having some 50 patch cables on hand; a veritable spaghetti of studio chaos.  Want to route Osc 3 to the pitch of Osc 1?  Drop in a peg.  Want to take the output of both and put them into the spring reverb, then run the spring reverb to the input A on the Ring Modulator?  All easy to pull off with a couple pegs.

(The Matrix) is to this synth what the step sequencer is to the TB-303.  It gives it its character.

It’s amazing, and this is where the recreation in the iOS shines, giving you the same unique functionality as the original.  There have been other pegboard matrices over the years (notably the Analog Solutions Vostok), but it is in the VCS3 that this style of programming took off.  It is to this synth what the step sequencer is to the 303, a means of interaction that helps shape the way you actually interact with the instrument.  It gives it its character.

Ok – so with all this background in mind, how does the apeSOFT iVCS3 sound and perform?

The oscillators are thick and detune beautifully, with a huge range and minimal digital stepping, bordering on none.

The filter sounds luscious, and the self oscillation is excellent.  Attention has been paid to detail here – at the self oscillation point, incoming signal sources still show through a bit and aren’t completely drowned out by the resonance, allowing for some pretty complex and gritty tones.

The spring reverb in particular jumps out (as it does in the original) as a means of adding depth, mystery and space to sounds.  As in the original, the ability to route the reverb pre or post filter (or both) allows for some REALLY cool tones.

The pegboard matrix itself couldn’t be nicer – double tap to zoom in on it, then drag and drop pins to bridge connections.  There is no audible lag when inputting pins and the range of application is astounding, as it is on the original.

The pegboard matrix itself couldn’t be nicer – double tap to zoom in on it, then drag and drop pins to bridge connections.

Also worth mention is the joystick controller, an x/y axis that gives you realtime control over user definable parameters – think of it as a mod wheel x2, mappable to a huge number of destinations and with definable ranges.  Excellent.

What is a meal without side dishes?

Included in the iVCS3 are a few excellent devices rooted in the instruments various versions.  Two keyboard controllers allow for note input, and a fairly easy to use step sequencer gives the ability to go beyond merely sound effect sculpting.

These inclusions make the iVCS3 much more palatable for the average synthesist than it would be otherwise, giving it true playability.

Another welcome addition is mic input and a sample player, which takes the already exhaustive feature list and boosts it further, giving you a large amount of sample mangling ability – although the ability to process external sounds is an old hallmark, the newfound ability to load a breakbeat or vocal into the engine and stomp it to death with the filter is new and awesome.

The real estate on screen is fought over a bit by the multitude of components, but it’s actually hard to see how this couldn’t be the case considering the iPads diminutive size and the sheer amount of “stuff” you get your hands on.  The keyboard relocation is a little tricky, and when you load up a preset there’s some minor graphical stutters, but mind you I’m testing this on an iPad 2nd Gen, so that may be a “me problem.”

The only other factor I can list has nothing to do with what apeSOFT has done, and that’s that the VCS3 is NOT an “everyone” synth per se.  It’s interface is a little daunting, and though it can do bread and butter sounds, it only really comes live in the hands of someone who understands modular routings.  In my opinion, that’s a good thing – the depth is there for you to grow, and I’d say take the plunge.

Inexpensive, sounds great, plays well and is an official port of one of the greatest synthesizers of all time.  No brainer purchase.

apeSoft have done well, and on no easy task.  Porting one of the most enigmatic instruments of all time onto a consumer grade device is something that 10 years ago would have been impossible.

The tiny UI issues are the only thing preventing me from giving this a solid 5/5, but it’s close, and those really don’t detract from the sheer amount of fun you can have experimenting with this.

If you know what you are getting your hands on, or if the name EMS brings tingles to your spine (it’s sort of like Indiana Jones hearing about the Ark Of The Covenant as far as I go), this is a total, 100% must have.

"I think my Tweaker is Broken."