Some say that the advent of “glitch” in EDM springs from diminishing attention spans and ADHD, but I think… uh …wait… what was I saying?  ;-)

DAWs have certainly brought about the ability to micro-manage editing, mixing, and sound design automation down to the nano-second, and if it CAN be done, eventually it WILL be done.  As such, ’tis the fashion presently in several popular genres—glitch hop, dubstep, electro-house, to name a few — to take sonic chopping and reordering of sounds as far as one can imagine, and then beyond.

But it hasn’t alway been so.  Jump in The Way-Back machine with me, and let’s take a trip aaaaaall the way back to 2006 when legendary producer BT released This Binary Universe.  Something of a departure for BT, this epic double album explored a wider range than previous releases, sonically, musically, and emotionally speaking.  And I recall interviews with him at that time describing the new software which he’d instigated and guided the creation of that allowed him to express these new directions.  At the time, it left even seasoned producers scratching their head wondering “How’d he DO that?!” 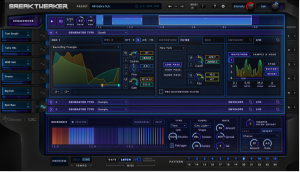 Cut to 2010 and Stutter Edit is the first collaboration between BT and iZotope, taking his custom sound-hackery tools to the masses in what for me is still one of the best sounding, innovative plugins available.  Prior to Stutter Edit, iZotope had been certainly known for their high quality processing plugins for mixing and mastering, but not for radically creative performance tools.  As such, it seemed like a curious choice for such a partnership.  But on second glance, there is a clarity in the sound common to all Izotope products that pairs perfectly with BT’s pristine, glassy aesthetic which actually makes them an obvious choice for each other.

There is a clarity in the sound common to all Izotope products that pairs perfectly with BT’s pristine, glassy aesthetic.

And that delicious pairing is back with a second helping of glitchy goodness in their latest offering, Break Tweaker.  If you took your intellectual staple gun and melded Stutter Edit with a step sequencer and a basic 3-layer sampler/synth, you’d have Break Tweaker.

Six individual sounds can be triggers from Break Tweaker in the usual plugin instrument way via six MIDI notes.  But the two octaves of notes above that trigger 24 patterns from the built-in step sequencer.  And these patterns are where you access the “micro-editor” glitch-sauce.  As well, each of the six sounds are comprised of up to three layers of sample playback or built-in synthesis, which is handy for creating layered drum or bass sounds for “glitching.”  The only time I ever opened up the manual was in search of a feature that wasn’t there: the ability to zoom the step sequencer in and out.  Everything else was obvious and where you would expect it.

But rather than describe what Break Tweaker does, I thought I’d just give you a video demo.  A “pros & cons” summary follows.  Enjoy.

No way to zoom the step sequencer, and no navigation keyboard commands.  A keyboard command for Undo would also be nice.  A personal preference: I think a value box to control step length—akin to the “speed” drop down—instead of the long slider would free up some valuable step sequencer real estate.  None of the Micro-Editor controls are accessible to external automation such as Instrument Rack macros.

I’m fully addicted to this puppy already.  The mark of any good instrument / plugin / DAW / power tool / boy- or girl-friend is “does it inspire you when you interact with it?”  This one does it for me.  If you liked Stutter Edit, you will like Break Tweaker.

We’ve all heard the chopping and repeating of a drum element, say a kick or snare, into a building crescendo by doubling and re-doubling its instances from quarter notes up to 32nd notes (and beyond).  But creating a fluid, parabolic curve of repetitions would be a pointillist programming nightmare.  Break Tweaker does easily with the twist of a knob.

One common creative hurdle in the song-finishing process is adding “sparkle” to the drums: fills, rolls, and other semi-random nuances that take your drums from a robotic drum machine pattern into something like a “performance”.  Through the use of playable, real-time switchable patterns, Break Tweaker can help you do this in some pleasantly surprising ways.

But as a live performance tool is where this plugin really shines.  Swap Break Tweaker’s patterns from a series of pads, keys, or even an APC40 or Launchpad, and bring your drum / bass / whatever patterns to life on-the-fly.  It’s addictive.

I think we will hear Break Tweaker’s influence on drum and bass programming for years to come.

An Interview With Kill Paris