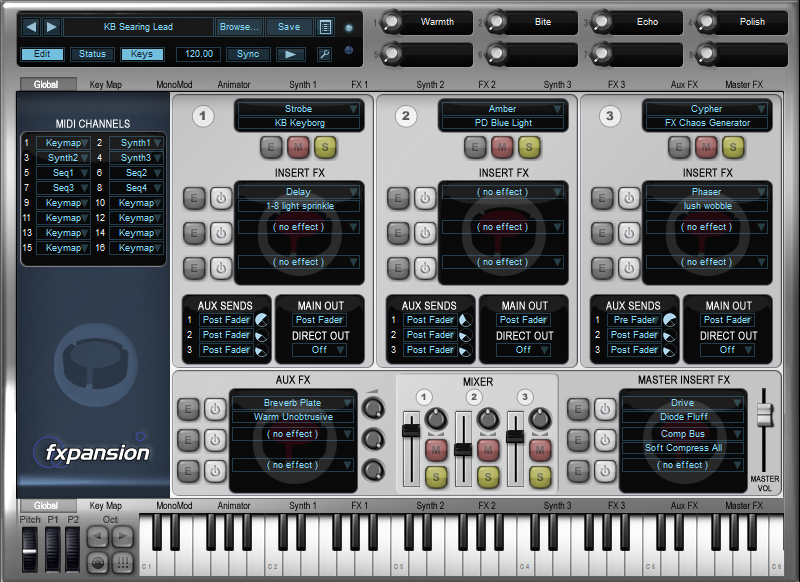 So – for those who don’t know you, let’s have a brief run down on who you are mate!

I grew up with computers from an early age and was always fascinated by their musical possibilities – even as a kid of 7 or 8 I was writing primitive sound generation programs in BBC Basic, playing around with code in Ian Ritchie’s “Music Masterclass” book.

I started playing around with synths proper about 20 years ago now, and began work on the ideas that eventually led to FXpansion as it exists today in 1998.

I grew up with computers from an early age & was always fascinated by their musical possibilities – even as a kid of 7 or 8 I was writing primitive sound generation programs in BBC Basic.

What was FXpansion’s first product? What did it do? How has the increase in computer power affected your projects? I’m assuming that 10 years ago there was no idea that we’d have platforms as capable as the ones we have now, but I could be wrong.

The first products I worked on were some sound-mangling plug-ins. That’s where the company name comes from (“FX” and “expansion”, of course). VST Instruments didn’t exist yet at the time; most of the early plug-ins (Waves & suchlike) were dedicated to basic bread-and-butter stuff like compression and EQ.

I wanted to use the then brand-new VST technology to do something a bit more leftfield and experimental; Cubase users will recognize their distant descendants in the MidiComb, Ring Modulator & Stepfilter that have been there since VST32 5.x & are still around in Cubase 6 – those are directly based on the original FXpansion plug-ins.

As it turned out, there wasn’t a massive commercial market for such things, but along the way I developed porting technology for converting VST plug-ins to the competing DirectX format, and that was the first real success.

The computing power we have now is amazing – much of what we do now has been enabled by it.  We did have some idea that computers would become this powerful in terms of CPU cycles, but I don’t think we’d have known what to do with it.

Having said that – the Athlon XP is ten years old now, that’s a fairly capable chip by today’s standards – I guess it’s about equivalent to the iPad 2’s processor. You can do a vast amount more at the same time on a modern 8-core machine, but the single cores are “only” maybe 4-5x as powerful. The evolution in chips between 1996 (166MHz Pentium) and 2001 (1.8GHz Athlon) was crazy – a much more than tenfold increase in power in 5 years.

Do you consider yourself a gear-head? Does this distinction influence how you create your sounds?

Very much so – I like to strip sounds back to their basic elements and build them up again, try and get my head around every stage of the synthesis process. I’m also always experimenting with unusual modulation routings and suchlike just to see what the end result will be like.

I like to strip sounds back to their basic elements and build them up again, try and get my head around every stage of the synthesis process.

What is your favoured approach to sound generation?  Presets or from-scratch?  Modular or static-routing?  Analog or VST, synth or sampler etc?

I like to create a clear separation between sound generation and recording. I’ll use digital hardware mostly for the convenience factor (if I’m looking for a “clean” real instrument sound, for example), or for a specific timbre (old FM synths, for example). Other than that, I like to work with an analogue modular for monophonic stuff, DCAM Synth Squad for poly sounds & more musical / less noisy leads & basses, Guru or Geist for drums.

I think analogue still has the edge for really raw mono sounds – there’s no software modular that quite nails it – but for 95% of synthetic sounds, VSTs do it for me.

For sampling, software is absolutely the way to go – if nothing else, the file management is a huge improvement over hardware. Most hardware samplers feel to me like not very powerful computers with a not very good interface.

Most hardware samplers feel to me like not very powerful computers with a not very good interface.

So you enjoy “happy accidents” obviously.  Did this play into designing the architecture for Synth Squad?  I find it lends itself very well to that.

Absolutely!  Our philosophy is to try and pack as much power, flexibility and control into the products as possible, while still keeping the interface simple enough for relatively non-techy people to understand.

What jumps out about it compared to other options?

Where DCAM nails it is the combination of very high quality sound generating components; a deep, flexible and musically-relevant modulation scheme; and an interface that makes it easy to understand what’s going on in a patch. There are plenty of synths (software and hardware) out there that can do two out of those three, but I’ve yet to find another synth that does it all.

Why make the use of Fusor optional?  I actually know some people who don’t realize what it’s role is per se.  I’ve found that the majority of the great possibilities with the synth exist because of Fusor.

A couple of reasons. First, there’s some CPU overhead – all that power does come at a price. Second, we wanted people to enjoy the circuit modelled analogue punch of Strobe et al in the raw, and get the preset designers to make sounds that worked great on their own without being smothered in effects.

Are there any idiosyncrasies that you either like / dislike about it?

The Animator step sequencer / arpeggiator.  It’s ridiculously capable, was inspired by things like the Doepfer step sequencers for hardware modulars as well as the drum sequencer in Guru and Geist. There are four independent sequencers that can be connected up in various ways.

So, for example, the clocking is (virtually speaking) voltage controlled, you can sweep the clock input on one with stepped values from another, adjust the swing amount or slew rate from the modulation wheel, even set it up to produce different modulation “voltages” for different notes in a scale.

It all feeds in to the TransMod modulation inputs on the individual DCAM synths, so you can do stuff like giving every 5th note on the keyboard a different pan position or filter cutoff. Like I say, ridiculously capable!

Animator is huge, agreed.  You say it was inspired by Doepfer hardware sequencers etc…any obvious inspirations for the other aspects of the program?  I feel like Strobe has a sort of “SH-101 on steroids” vibe.

Indeed! Strobe was inspired by the SH-101, Moog Prodigy, Pro-One and other monophonic bass/lead synths of the late 70s. Amber was inspired by the Solina and Crumar string machines; Cypher by big polysynths (especially the Xpander and Andromeda) as well as semi-modulars like the MS-20, ARP 2600 and Macbeth M3x.

Amber was a sort of odd inclusion from my point of view but I’m not complaining – it’s become a go to for lush patches. Can you give a brief on divide down architecture and what the motivation was behind including it in Amber?

Sure – we felt that there were basically three main categories of analogue synth based on different kinds of circuitry, and we wanted to build one of each. You’ve got the monosynth, the big poly, and the divide-down organ/strings/ensemble design; most of the classics fit reasonably well in to one or other category.

At the time, nobody had built a soft synth around a circuit model of the divide-down oscillator – Amber was the first synth to attempt it, as far as I know.

With divide-down, instead of one VCO per voice, you have a single very high frequency clock oscillator which is then “divided down” to produce waveforms for every key on the keyboard simultaneously. This gives you a “paraphonic” synth where you have full polyphony all the time on the oscillator (an unlimited amount of keys at once), but usually only a single VCF filter (and, in the case of string machines, a formant filter as well) across the whole instrument instead of one per voice.

Angus Hewlett is the CEO of FXpansion, a UK based company responsible for some of the worlds most highly regarded samplers, synthesizers, and drum machines.

An Interview With Elite Force